*WARNING: FOOD IS NON-HALAL. CONTAINS MOUTH-WATERING DESCRIPTIONS AND PHOTOS OF MEAT. READ AT YOUR OWN RISK*

Asia is the biggest continent of the world. I mean with forty-eight (48) countries, now that’s a lot of people (4.5 billion people as of 2016 population status that is). Asia is so big it’s taking over 29.5% of the global population! But as I’ve travelled Asia, meeting and getting to know people and their cultures made me realize that Asia might be huge but it’s a small world after all. No matter how big or how many oceans and other land masses divide Asia, it’ll always find a connection in any way possible.

You see, in history, Asia was considered as the underdog. As Europe went on crusades, Asia was just simply bartering around, minding their own business then they were suddenly getting colonized and all (FACT: Except for the slick nation of Thailand that is! Thailand was never colonized, they were slick enough to store enough money to pay off the colonizers and recognize themselves as a nation, even the French never saw it coming that they had that much money!). 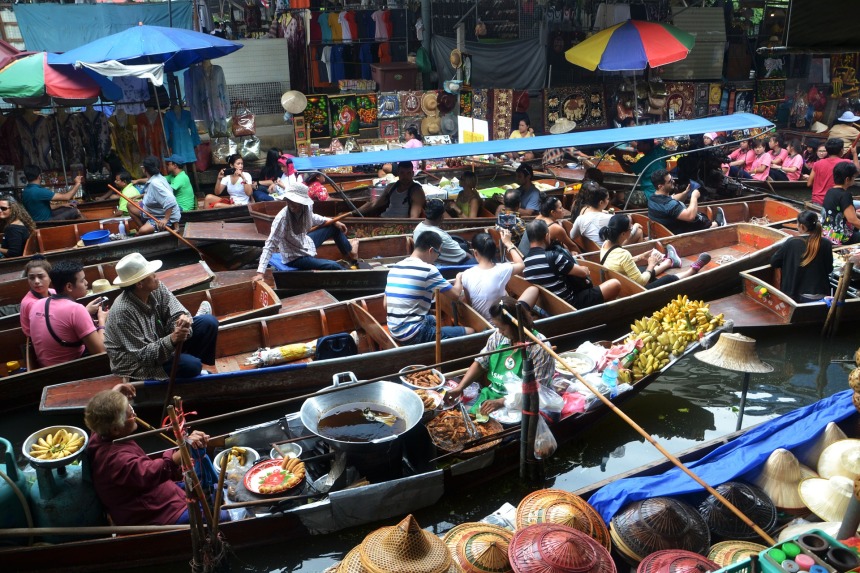 That’s the thing about Asia, even Asians colonized Asians. Asians fought alongside and sometimes against each other. Through those battles we shared houses, meals, traditions, and maybe even sometimes wives for all I know. As those years passed, little do we know that through all those colonizing and battles everyone simply adapted the massive waves of culture, religion, traditions, and cuisines along the way because they just got used to it.

Now let’s start off with something straight from my Visayan roots, the almighty HUMBA. Humba is Adobo’s sibling from the south, sweeter in terms of taste. This braised pork stew hails the basic ingredients of adobo which is pork, soy sauce, vinegar, garlic and aromatics (peppercorns and bay leaves) but with the addition of palm sugar, tausi (salted black beans) and dried banana blossoms giving it more aroma and flavor. Just like every other Filipino dish, every family has their own recipe or additional twists on preparing Humba like adding pineapple juice, pineapple chunks, oyster sauce and the sorts.

The Visayan dish gives you a sweet melt in in your mouth experience; The decadent pork fat literally melts in your mouth. Humba is usually served with boiled eggs and of course the favorite staple of Asian cuisine: warm rice.

On to our worthy opponent let us welcome Bak Kut Teh. The name Bak Kut Teh literally translates to “meat bone tea” in Hokkien dialect. Despite its name, there is in fact no tea in the dish itself. In between the 19th century it is believed that some Chinese workers first introduced this soup dish in Malaysia. The dish became famous as a breakfast dish served in the port town of Klang Valley. As time passed by Bak Kut Teh also made its way to Singapore and Taiwan *(so if you really want to know where this dish originally come from, you better expect it to come with an argument with some Asians)

Bak Kut Teh has a slightly medicinal taste in its broth because of its spice infusion of star anise, cinnamon and varying chinese spices usually from the five spice mix. The dish is loaded with pork ribs, dried shiitake mushrooms, tofu puffs and garlic, the aroma of the broth definitely fills up a powerful scent in the kitchen. Texture and color of soy sauce of varies depending on the preparation so this dish definitely has a lot of variations on its taste. 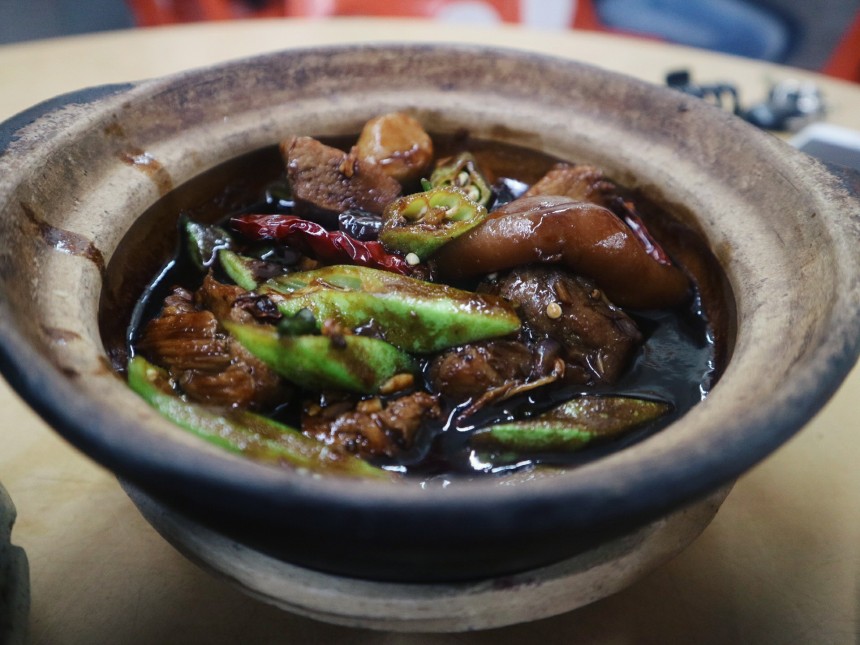 To boil it down Bak Kut Teh has three variations:

Slightly light in color (light soy sauce) and uses more pepper and garlic in the soup.

Brings out more of an earthy taste due to the use of a variety of herbs, soy sauce creating a darker and more aromatic soup.

In Malaysia, Bak Kut Teh is simmered down to a thicker consistency which makes it a “dry” Bak Kut Teh. 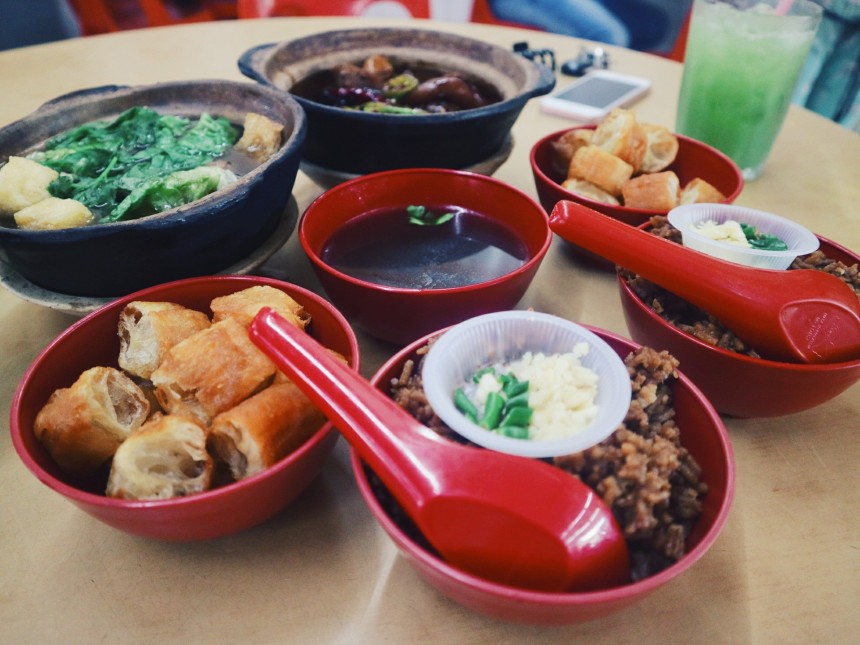 As we now got to know both braised pork dishes much better it’s time to determine the winner of this battle, of course, based on my personal taste!

Close battle, y’all! In the end, I like both pretty equally.

In Penang, I tried Bak Kut Teh in Sungai Dua, where it was quite near my local hosts. It was nice to be away from the touristy area for a change! 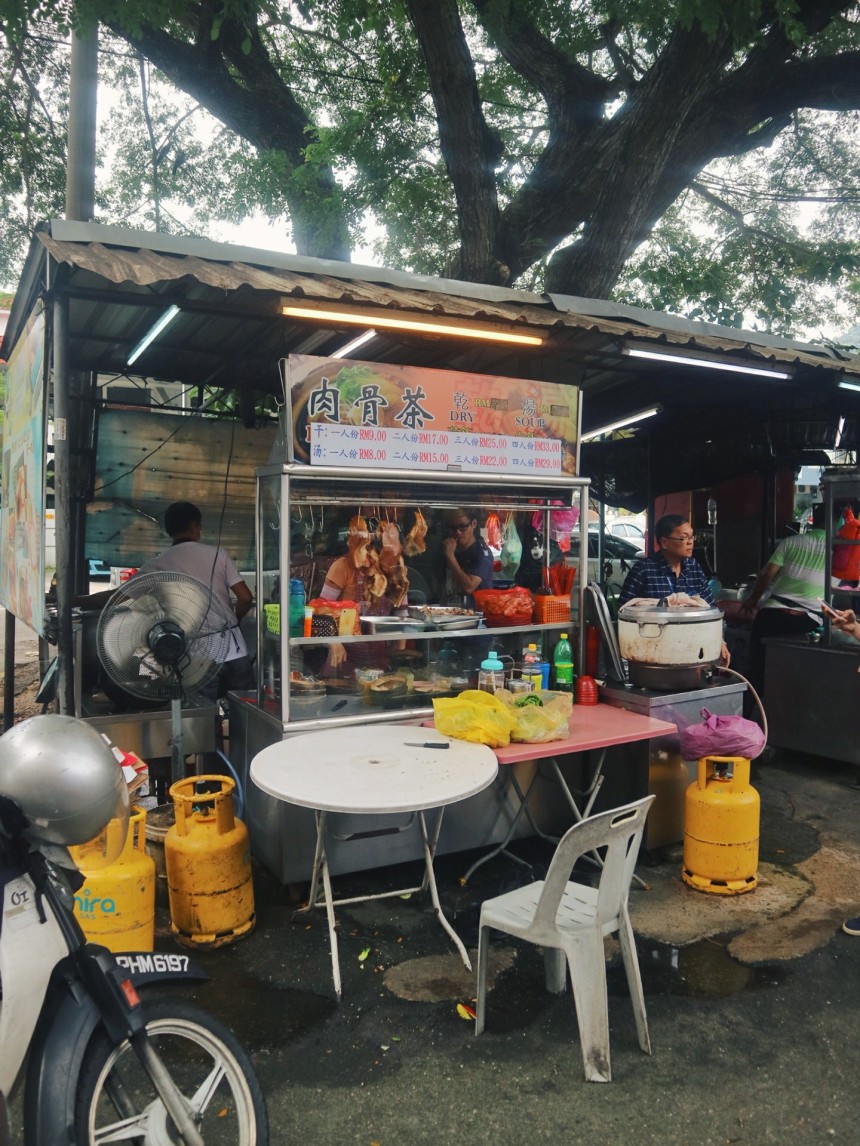